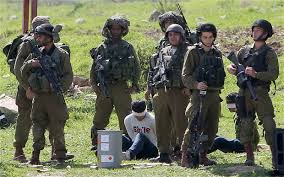 Please find below a link to our latest report “Summary of Israeli Aggression in the Occupied West Bank, including East Jerusalem” including the period between June 13th and August 26th, 2014.

“The Israeli aggression against the Occupied Gaza Governorates ran in parallel with the Israeli oppression and colonization in the rest of the Occupied State of Palestine. Ongoing aggression continued throughout the period of intensive attacks against Gaza, including the advancement of settlements, home demolitions, movement restrictions, detentions and settler violence.”

The Israeli aggression against the Occupied Gaza Governorates ran in parallel with the Israeli oppression and colonization in the rest of the Occupied State of Palestine. Ongoing aggression continued throughout the period of intensive attacks against Gaza, including the advancement of settlements, home demolitions, movement restrictions, detentions and settler violence.

Though Israeli spokespeople tried to present their attacks on Gaza as a particular action against Palestinian resistance groups, Israeli occupation and colonization policies all over the Occupied State of Palestine make it clear that the ultimate Israeli goal continues to be to prevent the establishment of a sovereign Palestinian State.

In fact, the Israeli Government has been trying to portray the situation in Gaza as a justification for not withdrawing from the West Bank. On July 11 PM Netanyahu said “I’m not prepared to create another 20 Gaza (…) The Israeli people understand now what I always say: there cannot be a situation, under any agreement, in which we relinquish security control of the territory west of the Jordan River (i.e Palestine).” This perspective was ratified the day a ceasefire agreement was reached (August 26) by Netanyahu’s Deputy Minister in charge of Liason with the Knesset (Parliament) Mr. Ofir Akunis: “No nation gives up on its homeland, and Judea and Samaria (i.e the Occupied West Bank) is the cradle of the Jewish homeland.”

Following is the toll of the Israeli aggression in the Occupied West Bank, including East Jerusalem, between June 13th and August 26th, 2014.

Israeli Forces and settlers killed 32 Palestinians all over the Occupied West Bank, including East Jerusalem.  The list of martyrs include:

In this report period 1397 Palestinians were injured by attacks from Israeli regular forces or gangs of Israeli settlers.

There was ongoing construction in most of the Israeli settlements in the Occupied State of Palestine. Israel also confiscated more lands and approved new settlement units during this report period:

The total number of settlement units increased during this report period to reach 1472, making room for almost 6,000 new Israeli settlers. The most significant settlement projects approved are located in strategic areas around Occupied East Jerusalem (Gilo and Har Homa from Bethlehem, Ramot and Giv’at Zeev from Ramallah) aimed at isolating Palestine’s occupied capital from the rest of Palestine, making impossible the creation of an independent State of Palestine.

There were also activities to expand settlements in the northern West Bank area, particularly in Burin – Nablus (settlement of Bracha), Yakir settlement in the Nablus area, Halamish settlement (north of Ramallah) and Salit settlement in Tulkarem lands.

Israeli forces detained 1753 Palestinians, or the equivalent to almost 24 Palestinians detained on a daily basis all over the Occupied State of Palestine. Detentions included several members of the Palestine Legislative Council.

This report period reflects a significant raise in the number of movement restrictions, particularly the number of flying checkpoints. At least 1187 were set within the Occupied West Bank, including East Jerusalem.

249 settler attacks were reported (3 daily attacks), including the brutal assassination of Mohammad Abu Khdeir, 16 years old, burnt alive after being kidnapped from the neighborhood of Shuafat in Occupied East Jerusalem. Settler gangs continue to attack Palestinians on a daily basis. Israel continues to grant impunity to the vast majority of the settler-terrorists.

At least 50 Palestinian owned structures were demolished, displacing 112 Palestinians, including 66 children and 34 women. 8 of the demolitions took place in Occupied East Jerusalem.