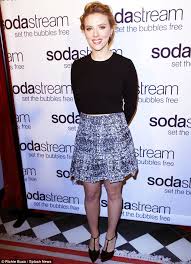 I am writing to express my deep concern over the fact that actress Scarlett Johansson, a Global Ambassador for Oxfam, has recently signed on to become Brand Ambassador for Sodastream, an Israeli company with production facilities in a settlement built illegally in the occupied West Bank.

Oxfam’s firm position against trade with Israeli settlements, which are illegal according to the IV Geneva Convention, is squarely at odds with the new position held by Ms. Johansson, one for which she will receive a fee, presumably sizeable, in exchange for a very visible public role in promoting products manufactured in violation of international law.

Nothing could be further from the truth. Palestinian workers at Sodastream’s factory live under military occupation, and therefore military law. They are denied their right to live on the land occupied by the settlement and to move freely in their own territory, having to rely on their employer for permits to simply reach their workplace. Oxfam’s own documentation also confirms that it is the Israeli occupation, from which Sodastream benefits, that has prevented the Palestinian people from developing their own economy, forcing the unemployed to turn to illegal settlements in search of job opportunities.

I trust Oxfam recognizes that this is a situation that cannot possibly continue. There is simply no way that Ms. Johansson can “push forward the fight against poverty and injustice” while endorsing and advocating the same policies that create and further poverty and injustice.

I have always appreciated and supported Oxfam’s commitment to end poverty and to stand with the victims. Just last week I was in Montreux standing with Oxfam to remind the world of the victims in Syria. Not adhering to its own sound policies and allowing Ms. Johansson to continue in her role with Oxfam would indubitably undermine the important work being done by the organization, in Palestine and elsewhere, damaging its credibility along the way.

Ms. Johansson has publicly stated that she continues to stand by Sodastream. As long as she maintains her affiliation with the company, Oxfam is left with no other choice.

I understand perfectly that this is a very complex decision for Oxfam to make, nonetheless I urge your organization to suspend Ms. Johansson from the role of Global Ambassador and end all ties until such time as she terminates her role with Sodastream.