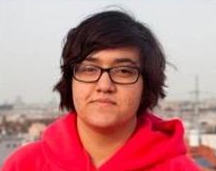 Conscientious objector Noam Gur sentenced to prison for her refusal to join the Israeli Army.

Noam Gur, 18 year old from, Kiryat Motzkin near Haifa, arrived yesterday morning, Monday, 16 April, to the Induction Base in Tel Hashomer, where she declared her refusal to serve in the Israeli Army as it is an occupying force. She was sentenced to 10 days of imprisonment for her refusal.

In her refusal declaration Noam wrote:”I refuse to join an army that has, since it was established, been engaged in dominating another nation, in  plundering and terrorizing a civilian population that is under its control.”You can read more about Noam hereHer prison address is:

Since the prison authorities often block mail from reaching imprisoned objectors, we also recommend you to send them your letters of support and encouragement via e-mail to: messages2prison@newprofile.org (hitting “reply all” to this message will send the message to the same address), and they will be printed out and delivered during visits.

Recommended Action
First of all, please circulate this message and the information contained in it as widely as possible, not only through e-mail, but also on websites, social networks, conventional media, by word of mouth, etc.Other recommendations for action:

Please send Noam letters of support to the prison address above and to messages2prison@newprofile.org.

It is recommended to send letters of protest on the objectors’ behalf, preferably by fax, to:

Another useful address for sending copies would be the Military Attorney General:

It would be especially useful to send your appeals to the Commander of the Induction Base in Tel-HaShomer. It is this officer that ultimately decides whether an objector is to be exempted from military service or sent to another round in prison, and it is the same officer who is ultimately in charge of the military Conscience Committee:

For those of you who live outside Israel, it would be very effective to send protests to your local Israeli embassy. You can find the address of your local embassy on the web.Here is a generic sample letter, which you can use in sending appeals to authorities on the prisoners’ behalf. Feel free to modify this letter or write your own:Dear Sir/Madam,It has come to my attention that Noam Gur (military ID 6084062), a conscientious objector to military service, has been imprisoned for the second time for his refusal to become part of the Israeli army, and is held in Military Prison no. 6 near Atlit.The imprisonment of conscientious objectors such as Gur is a violation of international law, of basic human rights and of plain morals. I therefore call for the immediate and unconditional release from prison of  Noam Gur, without threat of further imprisonment in the future, and urge you and the system you are heading to respect the dignity and person of conscientious objectors, indeed of all persons, in the future.

3. Letters to media in Israel and in other countries

Writing op-ed pieces and letters to editors of media in Israel and other countries could also be quite useful in indirectly but powerfully pressuring the military authorities to let go of the objectors and in bringing their plight and their cause to public attention.

Here are some contact details for the main media outlets in Israel:

We will continue updating on further developments. Thank you for your attention and action,  Yotam ShlomoNew Profile.