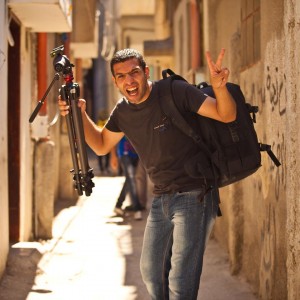 “ I am Mustafa Azizi, a Palestinian filmmaker from the people under occupation. My art offers images of the resulting occupation, carrying dreams of ordinary people to the world in order to narrate the horror of being under occupation, to look for hope among the rubble of difficulties.
I try to understand the reality converting it to the dreams, I say frankly and boldly what is happening and will happen. From this came this product which was conceived simple and crazy, to say this is my country and this is what’s happening to her. I am responding to what they give me, as a Palestinian. I want to give my opinion. I need Palestine as I want it and as I love it, not as they want to give it to us.”

“My film is simple.
This film was made because of an increase in the recent attacks of the occupation on the citizens and the various forms of stealing and burning land and killing Palestinian livestock farmers , and because the settlers have become the first line of Israel’s attack against the Palestinian villages.
The idea of this product was to address the world in its own language and explain to it the width of the issue of Palestinian Civil Resistance’s their weekly protest against the expansion of settlements, land theft, occupation. The closure of the main entrances to these villages, and daily attacks from settlers and army.
The film shows Palestinian people working hand in hand with international solidarity activists to move the conflict to a higher level, a global struggle against all forms of racism, humiliation and occupation against the forces of authoritarianism that enslave peoples and loot and steal in order to further colonial objectives. This conflict has become the popular form of expression the world uses against all types of exploitation. The non violent struggle has become a form of the Palestinian model and applies in all the corners of the world: sit-ins, tents and demonstrations against the authority, power and tyranny of monopoly and other types of capitalism that crush the poor , …
This film simply connects what is happening in Palestine to what is happening in the world. It also sheds light on a range of other issues and information about the Palestinian issue, which gives us a simplified idea of the conflict here for decades.”